The sequence of Biblical milestones, as miracles and revival in Spiritual Christian Unity continually increase throughout these end times.

The end times Jesus warned of have begun, and the time of tribulation is coming very soon. Christians in Christian unity are fully protected throughout these end time from all physical harm, disease, or attacks of evil, and in Christian unity, the time of awesome miracles and great revival in the body of Christ is now in progress. We have ahead of us at least three and a half years of relatively good times, perhaps much more. This will be followed by three and a half years of hard times, during which the world gets progressively worse, primarily for those outside of Christian unity. During this entire seven-year period, the united body of Christ grows continually in strength and in power of the Holy Spirit.

In Christian unity, we Christians will be protected from all harm even through the worst of it, but we’ll need ever- increasing faith in Christ, and we’ll need the strength of the Holy Spirit in us as we live through the coming great tribulation. The Christian unity that will see us through all this is the spiritual unity in holiness and brotherly love of all believers in Christ, regardless in which Christian group or denomination they are. This is unity in the righteousness of Jesus, Himself, which He gives equally to us all when we repent, and it’s also unity in the self-sacrificial brotherly love we do for all Christian believers in all Christian denominations and groups, including all who believe in the Bible’s account of salvation bought by the sacrifice of the blood of Jesus, acknowledging that He gives eternal life to all, whosoever believes to repentance, in faith of the same, one, and only Jesus Christ of Nazareth.

The Christian Unity Prophecy is a dynamic, living document that is revised and expanded from time to time. Partly, this is due to time constraints, to get the information into circulation in the body of Christ as fast as it can be written down. At least initially, more is known than time permits to explain. But also, we Christians will all come to know more together in Christian unity, as time goes on.

(If you've received a copy of this timeline by email, you may not be able to read the timeline unless your email is set for html vs. text.) 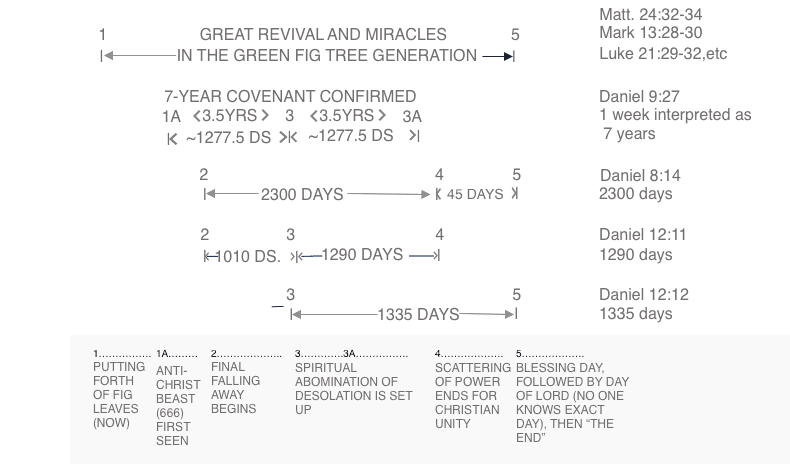 TIME PERIOD BETWEEN NUMBERED POINTS ON CHART ABOVE:

The sequence of events or stages outlined here are listed as follows:

Please note that the precise day or hour that heaven and earth pass away is not known nor is it specified here. I have never intended to suggest it had to take place in this generation, and in fact, I doubt it will, but it's only for God to know for sure, which is what I've consistently stressed in all I've written, and what has been clearly shown on the timeline. Our concern is simply to obey until He comes.

Matthew 24:35 Heaven and earth shall pass away, but my words shall not pass away.

36 But of that day and hour knoweth no man, no, not the angels of heaven, but my Father only.

Jesus said that we Christians could all recognize, without doubt, the signs of the end times by understanding two important events or stages, shown above as item numbers 1, and 3. It turns out that using these two times, plus knowing that Christian unity is the purpose of all end times, is enough to construct all of the above Christian Unity Timeline from references Jesus made to the Bible Book of Daniel concerning the Abomination of Desolation.

The first, The Putting Forth of Fig Leaves, the stage we are now in, is for advance warning that the things of the end times are starting very soon. The other, The Spiritual Abomination of Desolation, is to signify a critical midpoint of the Seven-year Covenant Confirmed Period. These two signs that Jesus mentioned specifically, as well as all the others, can only be understood in correct spiritual context, by understanding their meaning relative to Christian unity, which is God’s purpose for the universe, and the whole reason why Jesus came to earth at all.

(This Section Under Construction. For now, the scriptures are only quoted, but will be explained soon.)

Daniel 9: 27 And he shall confirm the covenant with many for one week: and in the midst of the week he shall cause the sacrifice and the oblation to cease, and for the overspreading of abominations he shall make it desolate, even until the consummation, and that determined shall be poured upon the desolate.

Daniel 8: 14 And he said unto me, Unto two thousand and three

hundred days; then shall the sanctuary be cleansed.

Timeline Point 3, Abomination of Desolation Is Set Up, 1290 Days

Daniel 12: 11 And from the time that the daily sacrifice shall be taken away, and the abomination that maketh desolate set up, there shall be a thousand two hundred and ninety days.

Daniel 12: 12 Blessed is he that waiteth, and cometh to the thousand three hundred and five and thirty days.